Family History Files of the Petworth Project
Father Edward Jackman and the Jackman Foundation have donated the Family History files collected before 2000 to the Doris Lewis Rare Book Room of the University of Waterloo library in Waterloo, Ontario.
The University of Waterloo serves a region where many Petworth immigrants settled. These materials on English settlers and settlement (GA 136) are added to substantial holdings for immigrants who came from Germany and Pennsylvania.

Thomas Adsett, 1833
"The people is so agreeable here. The people I am among is Dutch [Pennsylvania Dutch] and English, in general. The place is called Waterloo, where I live and my children."

The West Sussex Record Office is the major source for the work of Thomas Sockett and his Petworth Emigration Committee and for the English background of Petworth immigrants. Their family connections at home provided many of the clues which helped us to identify them among Sussex people of the same name and similar background.

The seal used as the signature of this website is one created for Sockett and his committee.

John and Caroline (Francis) Dearling, 1836
"Dear father Dearling, brothers and sisters ... We wish to know how sister Charlotte and her family is getting along; say if you heard of Mary. How is Hannah and her husband doing? Give our love to William and Dinah .... Daniel... Dear Sister Jane ...."

Additional Information on First Generation Petworth Emigrants
During the pre-publication period, the large number of immigrants made it necessary to focus on known "clusters" of Petworth settlement, and restrict the tracing of descendants to one subsequent generation. In England, the project did not extend beyond the birth origins of the emigrants. There are still some emigrants about whom we have little or no information other than the family names included in our indexes.
Early on, we turned to the genealogy community to seek potential descendants; a good number from around the world came forward with additional family information or letters and photographs. Between 2001 and 2007, we received some new information that was too late for the book but too interesting to lose. We forwarded this material to the University of Waterloo.
(For a summary of all correspondence, please see Shared Family History.)
Here are some brief examples:
SAGEMAN (SEDGMAN), PANNEL, NAPPER: Members of these known Petworth families from the London and Strathroy areas were involved in a horrendous boating accident on Lake St Clair in 1869.
RAPSON: Emigrant Thomas Rapson has been identified as a brother of James and William Rapson. Rumours mentioned in English Immigrant Voices, p. 217, that William later emigrated to Australia are confirmed.
MANN: From a direct descendant of Noah Mann and his son Shadrac, we learned that the emigrant family had settled in Yarmouth Township in Elgin County, whence the reference to "north street." Noah Mann died there in 1881.
VOICE: Wonderful photographs accompany new information on the Cornelius Voice family, which settled in Illinois and points west. 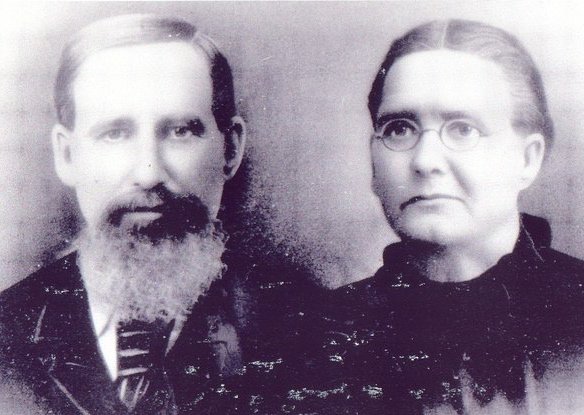 Cornelius and Elizabeth Voice who emigrated from Billingshurst to Woodstock in 1834.
Photograph courtesy of Kenneth Stormer

In 2009 we started the Facebook group Petworth emigrants as a place for descendants to post queries, share additional information, or, if they wish, to get in touch with each other.