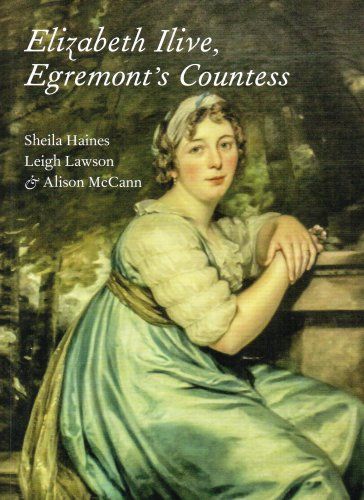 "The book is beautifully presented and contains a large number of illustrations, many of which reproduce original documents and artefacts from many sources as well as those from Petworth House and West Sussex Record Office."
Helen Whittle

"The late Sheila Haines put an immense amount of work into researching the life of Elizabeth Ilive in collaboration with Leigh Lawson. For the present project Leigh enlisted the help of Alison McCann with her unique knowledge of the Petworth House archives and Jonathan Newdick whose distinctive presentation skills are very much part of an impressive biography."
Peter Jerrome, The Petworth Society Magazine No 171 March 2018

Exhibition:
Elizabeth Ilive - A Woman Ahead of Her Time
Petworth House
5 May - 31 December 2018

Available from The National Trust Shop at Petworth House, the Petworth Bookshop, and West Sussex Record Office for £14, or direct from the authors for £10 plus postage - email Leigh Lawson, kinship2@hotmail.com
Elizabeth Ilive was no ordinary woman: sponsor of two paintings by William Blake, winner of a Silver Medal from the Royal Society of Arts for her improved crossbar lever and a contributor to the Annals of Agriculture for Arthur Young.
William Blake, in his dedication of Satan Calling up his Legions, refers to her in powerful words: ‘Egremont’s Countess can controll – The flames of Hell that round me roll’.
In the course of their research, the authors have been able to confirm previously uncertain aspects of Elizabeth’s background. Her father was a member of the Ilive printing family of Aldersgate in London. Amongst her ancestors were Elinor James, the notable London printer and Dr. Thomas James, first librarian of the Bodleian Library in Oxford.
Now, with the publication of this biography, we have a glimpse into her life at Petworth House, as the mistress of the 3rd Earl of Egremont, their eventual marriage and the death of their only legitimate baby.
We hear Elizabeth’s voice through her surviving letters: ‘I have sent you a model of a mechanical invention of my own which you will laugh at as every body did here at first’ she wrote to Samuel More, secretary of the Royal Society of Arts.
To her daughter Fanny, Elizabeth wrote from Norwich: ‘I have sent you and Charlotte a Jacobean pedgion from this place… I hope your papa will not be angry at my sending them.’
To a friend, describing her visit to Kent she wrote that Dover was ‘nothing but Stenches’ and ‘in the Town nothing but Sailors’. She preferred Ramsgate and enjoyed her first bathe in the sea which was ‘very warm & I liked it much’.
Dr. Sheila Haines started writing this biography and after her untimely death, her co-researcher, Leigh Lawson, continued the project with Alison McCann, building on Sheila’s work to reveal the fascinating story of Egremont's Countess.

WHAT OUR READERS SAY

"The book is a 'good read' at many levels. Elizabeth's story is fascinating in its own right and it is not necessary to have any interest in either Petworth or the Egremonts to appreciate the research and scholarship which has gone into this work."

The Researcher (the newsletter of West Sussex Archives Society)
No. 100 January 2018.

"Well done, you all have put so much in to it, there seems to be hours and hours of research. Not only is it about Elizabeth, but it is a good insight into that period of history. The layout and illustrations are just right, and well presented, as well as being easy to read."

"I bought your book and couldn’t put it down until I’d finished reading it. What a wonderful piece of scholarship. I hope that Elizabeth’s achievements will now receive the recognition they deserve. "

"Really impressed with the quality of the research in Egremont’s Countess. It must have been quite hard to balance ‘facts’ (such as they are) with accessibility and entertainment, but you seem to have achieved that. I was thinking the story might make a good TV drama!
Incidentally, I was interested that Elizabeth had a short stay in Norwich, did some shopping and complained about the cobbled streets. The streets around the Elm Hill area are, of course, still cobbled – no problem if you wear flat shoes, as I always do. "